Updated in November 2021: This investigation is in the report phase.

On 6 August 2021, a Beechcraft A100 King Air operated by Thunder Airlines was conducting a flight from Timmins Victor M. Power Airport, Ontario, to Moosonee Airport, Ontario. After an unsuccessful first approach to land on Runway 06, the flight crew conducted a second approach for Runway 24. After touchdown, the aircraft continued along the runway and came to a stop approximately 50 feet beyond the threshold of Runway 06. Heavy rain was reported in the vicinity of the airport at the time of approach and landing. There were no injuries. The TSB is investigating. 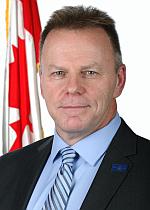 Glen Whitney joined the TSB in June 2008 as an investigator/operations specialist in the TSB Air Investigations Branch at Head Office, in Gatineau, Quebec. He has over 26 years of civil aviation experience and has accumulated over 14,000 flight hours.

Prior to joining the TSB, his experience was gained flying floats, northern and gravel operations as well as scheduled commuter airline flying. He was also involved in flight crew training and checking and was the chief accident investigator at the airline.